Aerial views of the university in the early 1960s show a wide-open space on the outskirts of town with a few buildings but no residences, immediately establishing it as a commuter campus.  At first parking was not an issue, but with the completion of more buildings, parking areas shrank.  Some limited bus service existed, often a source of complaint.

For several years, the university and the city planned for an underground rapid transit station located beneath MacEwan Hall, with hopes of completion by the late 1970s.  A modification to this plan had the line running west of Engineering, although this required the city moving the next station away from the Brentwood mall.

By 1981, plans had changed to consider surface routes instead.  The city wished to run tracks through the centre of campus, with a level crossing at the south-east corner (Crowchild Trail and 24th Avenue).   Researchers conducting delicate experiments in the science complex voiced concerns about the effect of the vibrations, and campus planners were not in favour of destroying the “park-like” atmosphere they had worked so hard to create.  The university considered locating the station in the median of Crowchild Trail as the best option, and in June 1982, deliberated on an “enclosed skywalk between L.R.T. station and campus internal pedestrian system” for $1,650,000.

Pressure mounted for a world-class mass transit system following the announcement of the 1988 Winter Olympic; a survey indicated a large majority of Calgarians considered the north-west leg of the LRT a priority to serve the university and the Olympic Village.

However, the issue of where to locate University Station (and, consequently, where to route the whole line through Banff Trail-University-Brentwood) took several years to settle.  In 1984, two local papers scolded the university for continuing to refuse to run tracks across campus.  The newspapers advanced the idea that in exchange for the gift of land to the university in 1960, and the expensive gift of “a speed-skating oval it neither needs nor will likely use,” the university owed the city and should repay Calgarians by letting the LRT line go wherever the city wanted.   In another source of contention, the university pressed for an underground tunnel between Banff Trail and University Station instead of a level crossing at Crowchild Trail and 24th Ave, one of the busiest intersections in NW Calgary.

Construction of University Station ultimately took place in the centre of Crowchild Trail, but without the covered walkway connection to the campus pedestrian system. The line, which at the time terminated at University Station, became operational by September 1987.

In the early 1970s, traffic along Crowchild Trail had increased to a degree where pedestrian crossings at grade were no longer safe.  The City offered to install a standard flat precast concrete bridge.  Professor Bob Loov of Civil Engineering convinced the City to include an arch with an underslung walkway, provided the University came up with the extra cash.  Loov later won an award for the design.  Sometimes known as the Rainbow Bridge, the term comes from the design, a “stabbogen arch” meaning “stick + rainbow.” The arch is the “rainbow.”

The widening of Crowchild Trail in 1986 resulted in the removal of the overpass.  Following consideration of six different sites for relocation, the arch became what President Wagner called “an extremely attractive and splendid welcoming point” at the 24th Ave entrance.  Wagner also noted at the opening ceremony:  “Bob Loov assures us that the arch is modelled on the well-known chinook arch, that bringer of good tidings on rare winter days.  Therein we find a deeper symbolism.  The key to any good chinook is hot air.  How appropriate to much of our activity!  But chinooks are also sources of unrest and anxiety.  In other words, a chinook stirs up the complacent. What symbol could suit us better?”  The arch was painted red in 2012.

In 1994, Calgary’s Hungarian community installed the Magyar Centennial Gateway in the green space where the LRT bridge decants pedestrians onto campus.  The Gateway is dedicated to the contribution Hungarian immigrants have made to Canada and to commemorate Hungarians killed during the 1956 Hungarian Uprising. 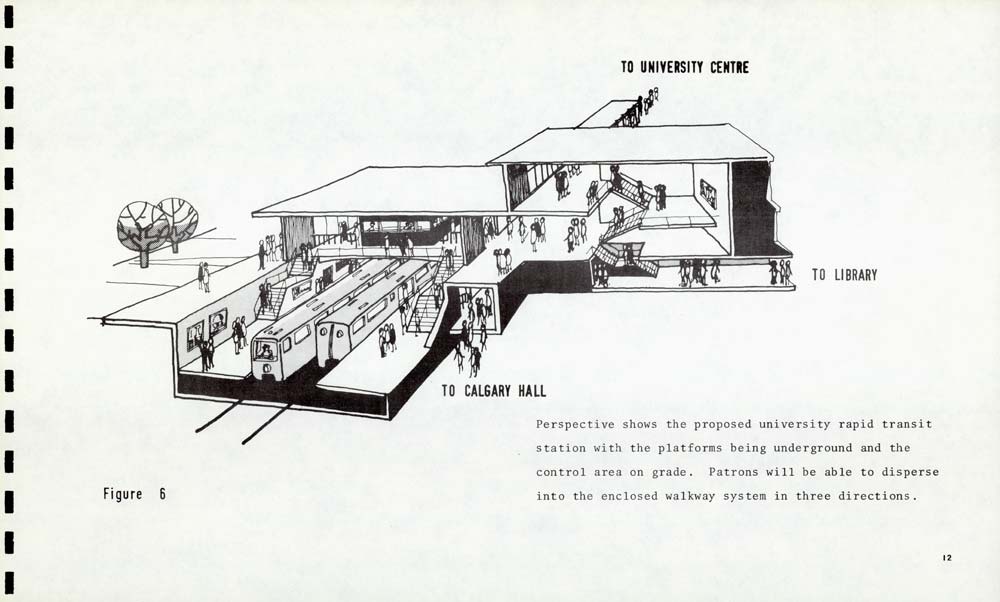 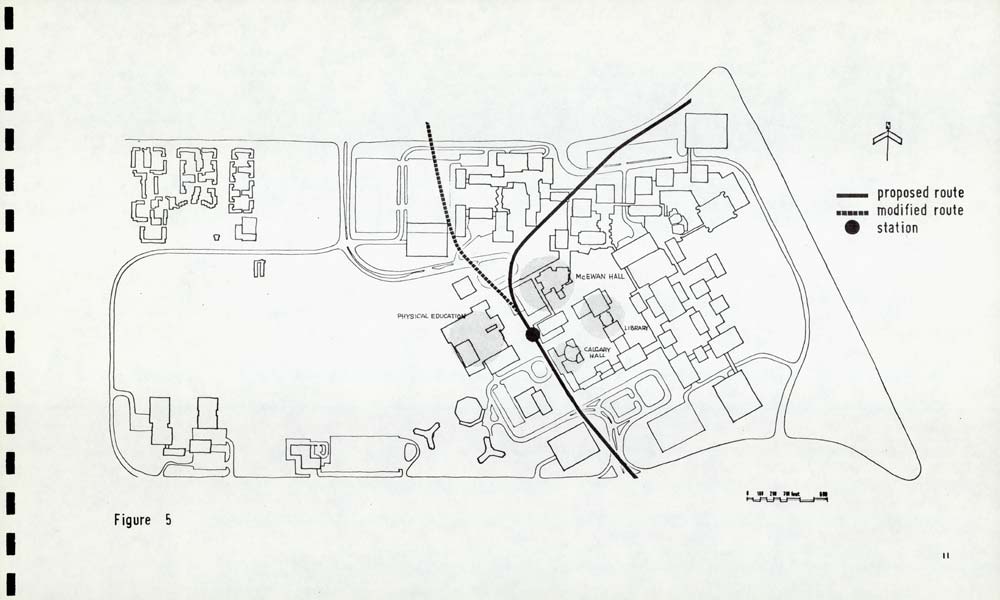 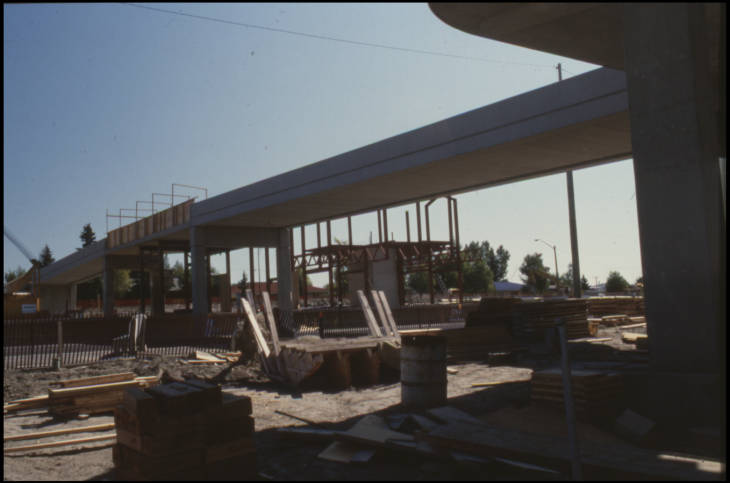 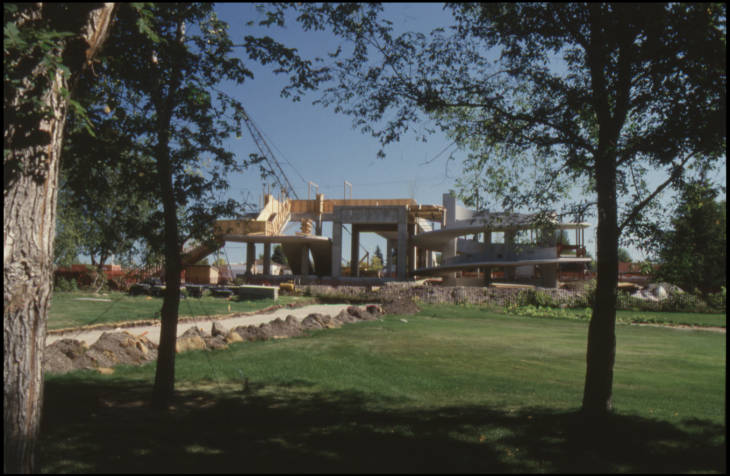 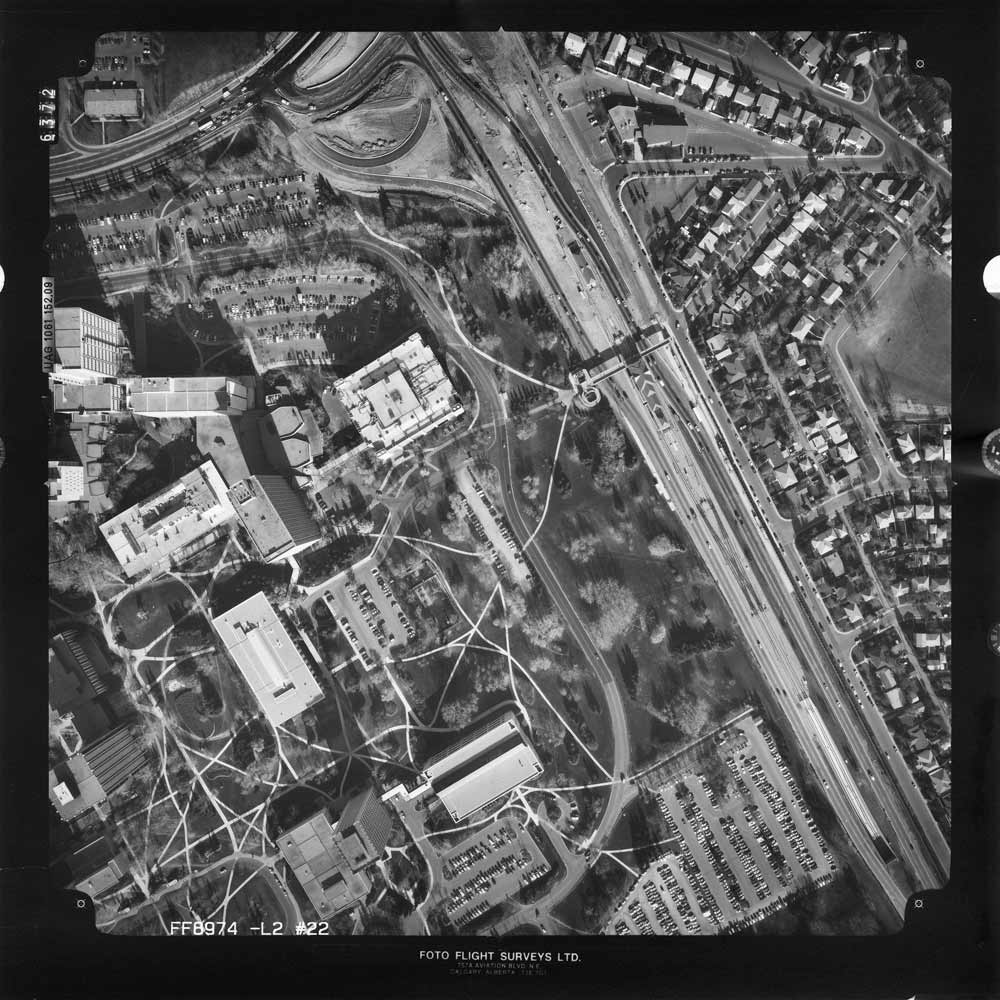 There is no doubt that a suitably located rapid transit station would be a great advantage to the University and the City.