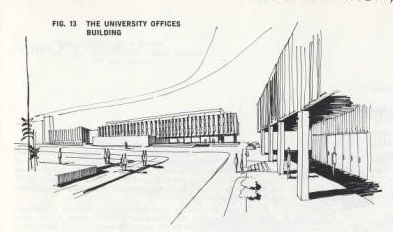 An administrative building project envisioned in the 1960s and 70s would consolidate all administrative activities into one large area.   The project went by various names:  University Offices Building; Centre Block; West and East Blocks.  The proposed site location is where Murray Fraser Hall and Professional Faculties Buildings are located today.

Planning for the building began in 1964 but lacked top level approval.  President Herbert Armstong wrote strong words about the project in fall 1966: “As long as I have anything to do with this University I shall resist any such move [to a segregated administrative office building]. I most emphatically do not want to be put in a position in which my office and those of others associated with me are removed from an academic building upon the urging of the academics in that building, and then that the administrative officers be charged with being ignorant of the proper academic functions of the University.”

In 1967, the long-range development plan still called for a University Offices Building located on the south side of campus as a “gateway” to Swann Mall.   The plans called for a 71,250 net square feet footprint at a cost of $2.6 to $2.9 million, with an occupation date of fall 1969.

These plans went nowhere, and by 1971, the concept for the project had changed slightly.  The name changed to Centre Block after abandoning “University Offices Building 1968.” A new plan shows 114,810 net square feet and an occupation date of fall 1974. The building would include a “major food facility”, as well as offices and conference space, and the Departments of History, English, and Classics, including offices and classrooms. The Block would “be located east of Calgary Hall and south of the Library Addition,” adjacent to Calgary Hall, with a bus loop and waiting area.

The goal for this phase of the project involved “explor[ing] the development potential incorporating the Centre Block and Education Expansion programs to link Calgary Hall, the Library, Education and Arts”. Centre Block was meant “to consolidate the proposed expansion of the Humanities with facilities already existing in Calgary Hall and will relocate the University Administration from Arts allowing for the expansion of Psychology in that structure.”  The building would feature the standard flamingo quartz and bronze frames in order to “possess a contiguous architectural theme characterized by quiet elegance.”

However, in May 1973, the building plans were finally retired due to lack of funding.  For the first time in the university’s history, enrollment had declined instead of increasing, leading to a lack of urgency in planning and designing new spaces. 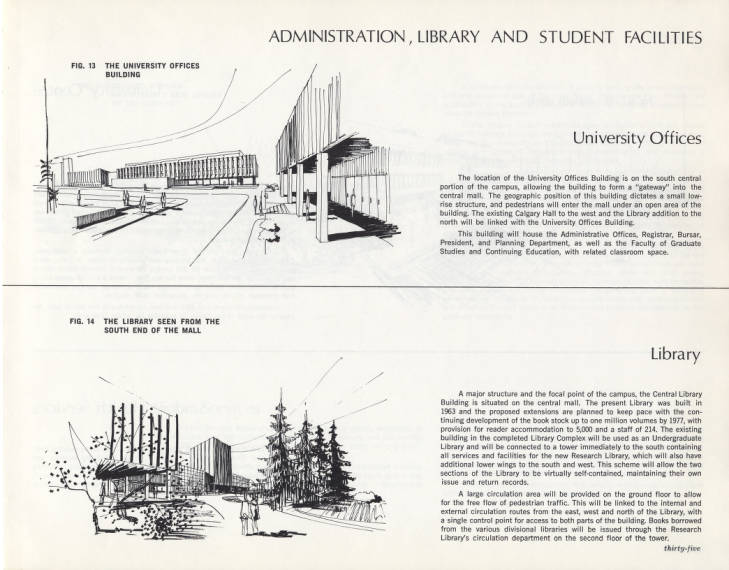 The scale and proportion of the elevational detailing reflect an orderly and dignified character and a pleasing relationship to the architectural values of the surrounding structures.