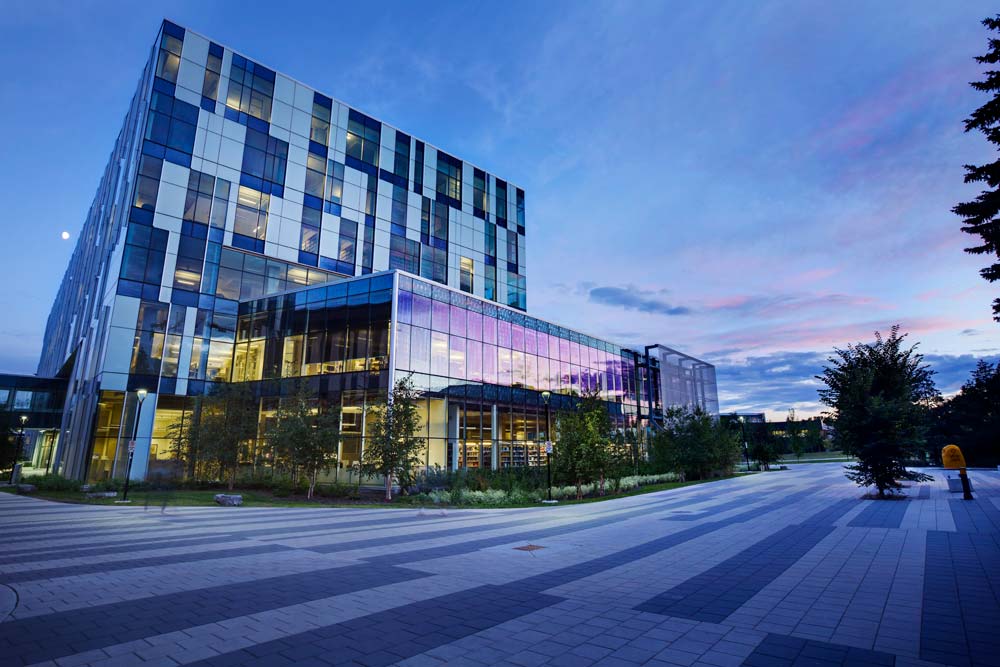 The TFDL initially grew out of a dream for a larger Information Commons than what existed on the 2nd floor of the MacKimmie Block.  This space had so successfully “integrate[d] digital, print and visual information in a single mediated environment” that borrowing had risen 56% and information literacy had jumped 113%.   When the architectural firm began drawing up plans in 2001 for what a digital library might be like, the idea of access to electronic research was still a novelty:  “Imagine a place where all information, whether digital databases or full text, art slides or digital images, museum collections or archives, could be accessed simultaneously. Imagine a place where you could access the collection around you, secure digital files and get the technical and reference help you needed all in one place.”

The location and name of the TFDL changed many times over the years.   Originally called the Information Commons, and located in a massive expansion to the shell of the Administration building, occupants included information technology, the library, archives, and media resources, Nickle Arts Museum, Student Services commons, Alumni Centre, and Continuing Education.  A High Density storage facility located on campus accompanied this building.  A space shuffle of units occupying MacKimmie Tower would free up significant square footage.  Hope abounded for completion of the project by 2006, in time for the university’s fortieth anniversary.

By 2003, the project went by the name of the Campus Calgary Digital Library (CCDL), or “Canada’s first post-secondary-based digital library [that] will service the entire southern Alberta community…For the first time, the public will be able to electronically tap into the University’s vast information collections, and access data from around the world for business, education and non-profit applications.”  The location had shifted west of the MacKimmie Tower, with possible encroachment on the existing footprint of Craigie Hall.

A ceremonial ground breaking took place in spring 2006 but construction stalled due to ongoing funding concerns.  In December 2006, Don and Ruth Taylor donated $25 million to the project, and gave their name to the proposed building: the Taylor Family Digital Library (TFDL).  Planning now included a repurposing of the Mackimmie Tower, and an additional 20,000 square metres of new construction including the decommissioning of Craigie Hall Block C, and expansion of the 6th and 7th floors of the Arts Parkade.  A portion of the Taylor’s gift included the creation of the Taylor Quad to the west of the new building and south of MacEwan Student Centre.

In January 2008, the provincial government allotted $97 million to the university for the TFDL, the HDL, the Taylor Quad, and campus infrastructure upgrades. The announcement called the TFDL “a digital revolution.” The federal government supplied funding as well, and in 2010, the city donated $3.3 million to establish the Nickle Museum in the building.

Construction began in the spring of 2008, and in January 2011, the first two floors opened with the grand opening in October. In 2014, the TFDL received LEED Gold certification. One of the elements that contributed to the LEED Gold certification is the TFDL’s displacement ventilation system. Ventilation runs through the floor and is more energy-efficient than traditional heating systems.

The Taylors donated the large bronze bear that stands in the quad.  Brian Cooley is the sculptor.

In 2005, plans for the building included drop-in childcare.

The designers of the quad, O2 Planning, designed the pattern of the paving stones to look like satellite images of prairie fields.

Steven Heimbecker designed the large windchime that stands near the bear.  In 1990, this sculpture occupied what was once called the sculpture garden, a courtyard north of the University Theatre. The 600-kilogram piece, made up of 145 chimes around a central pole, remains in the same general area, although it is no longer referred to as a sculpture garden. 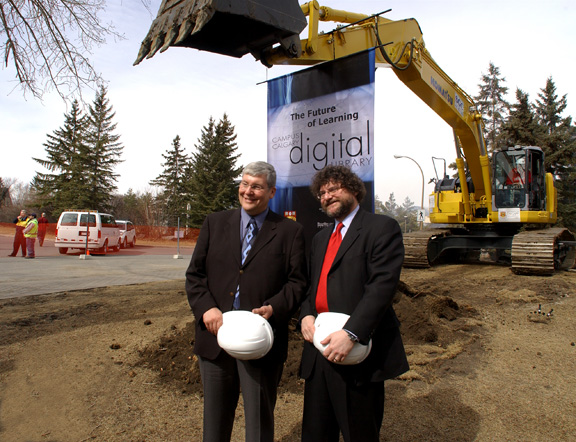 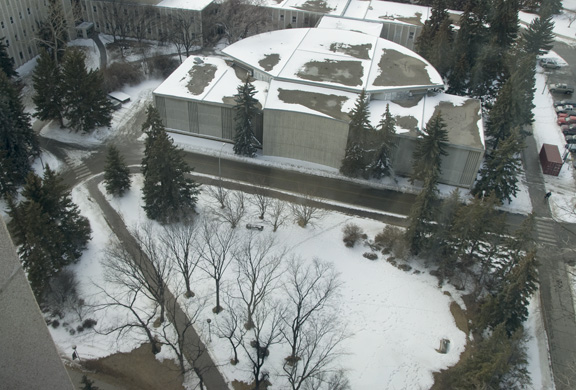 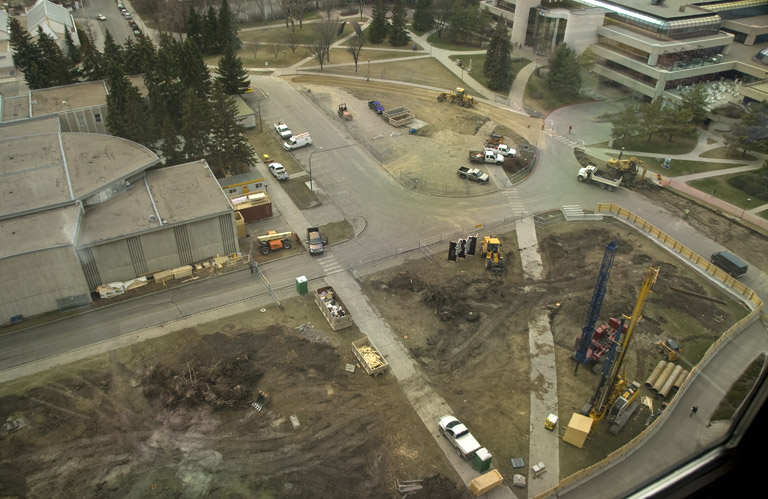 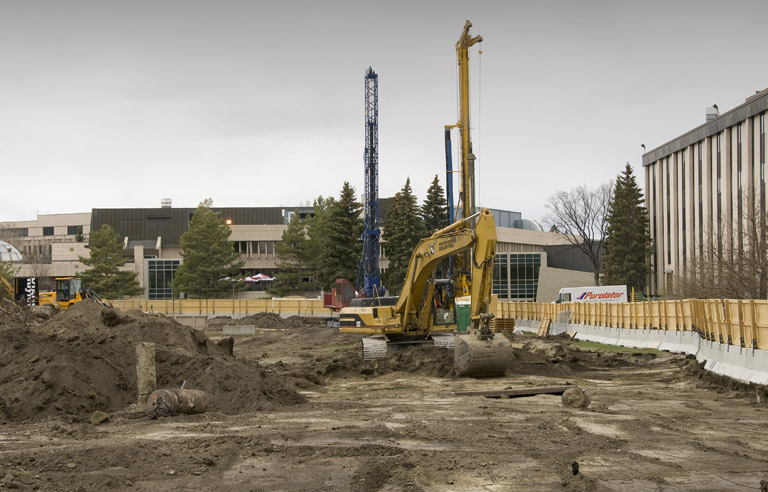 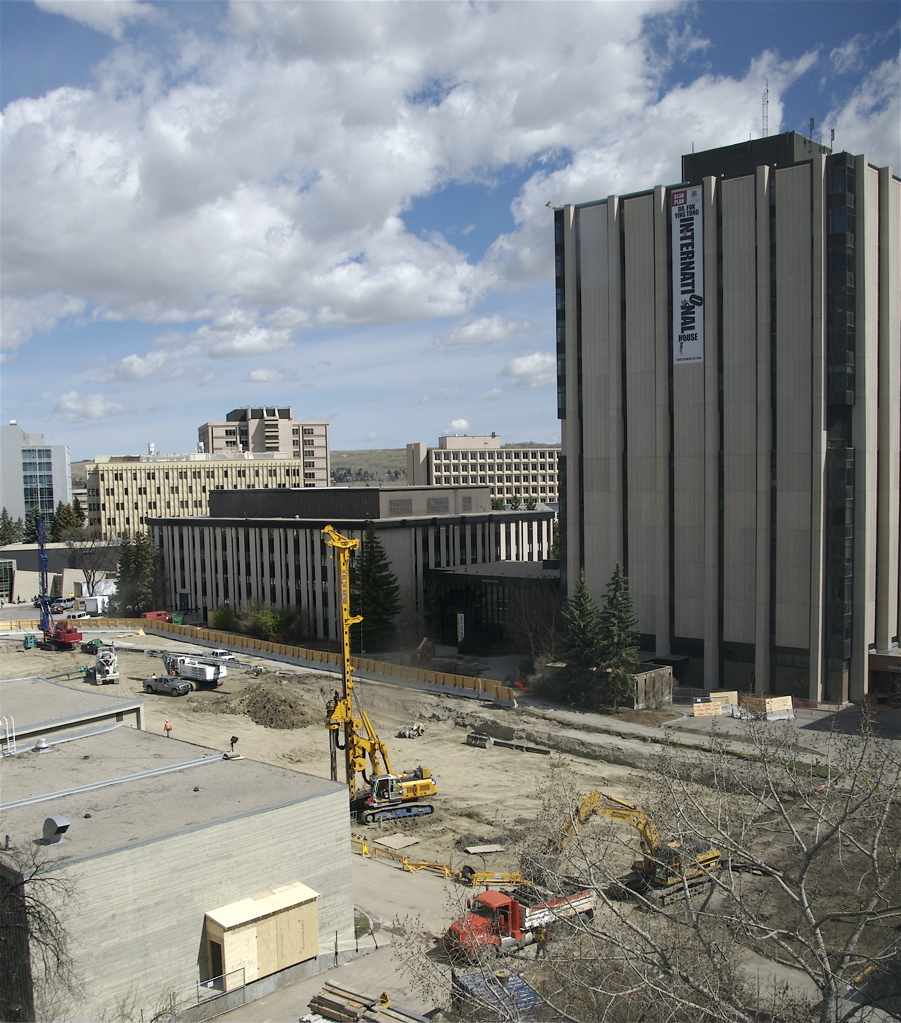 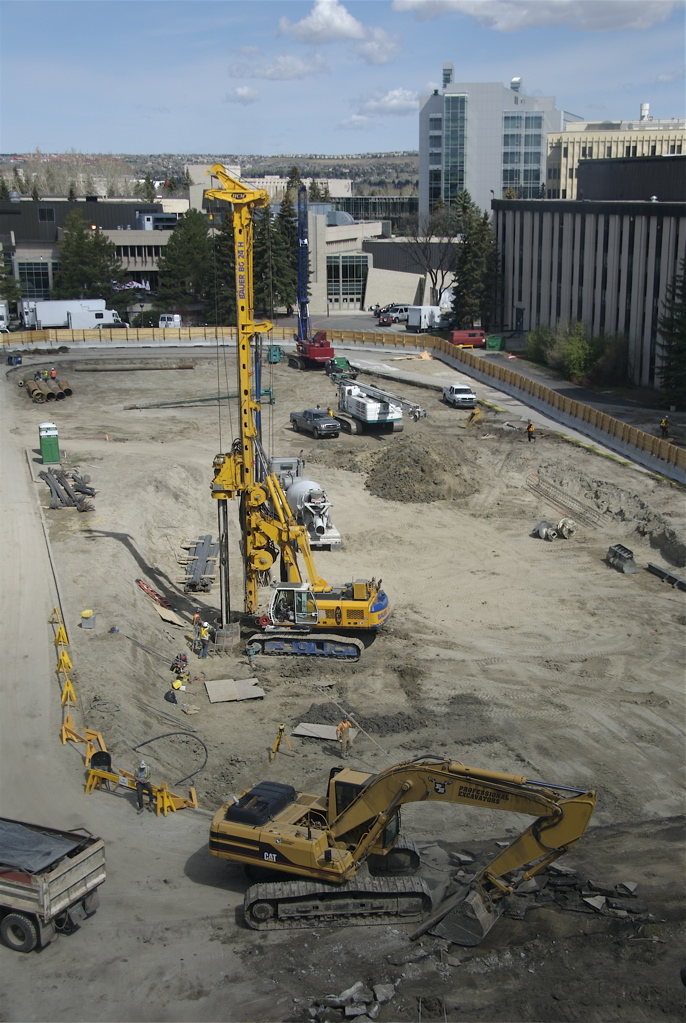 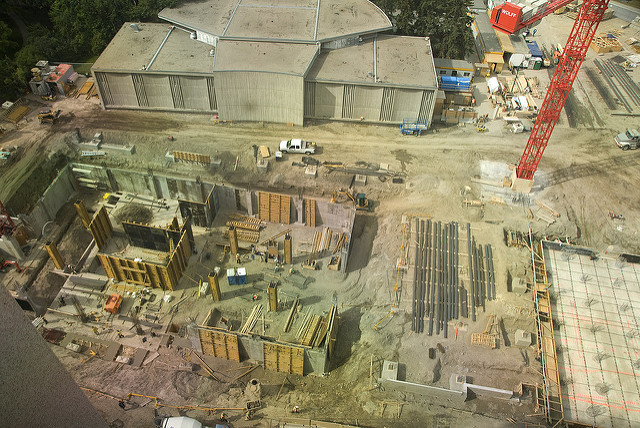 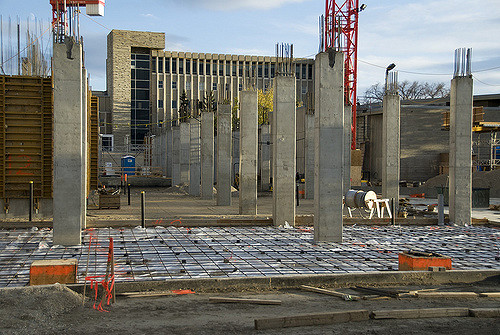 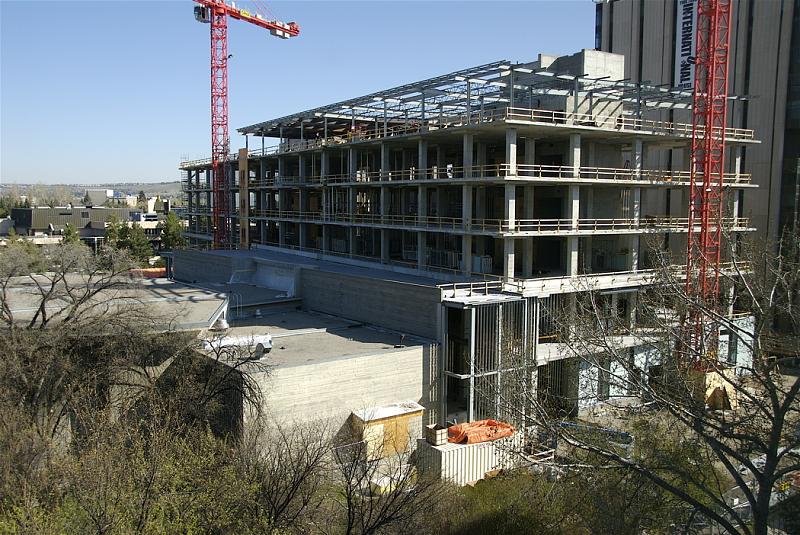 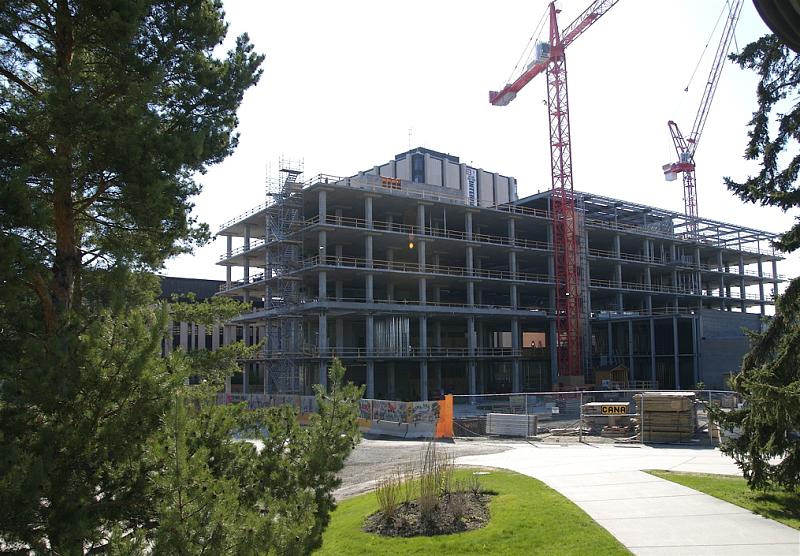 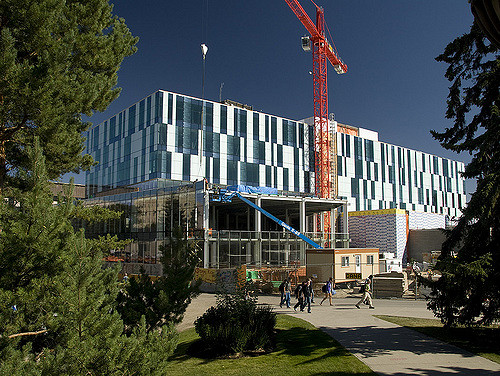 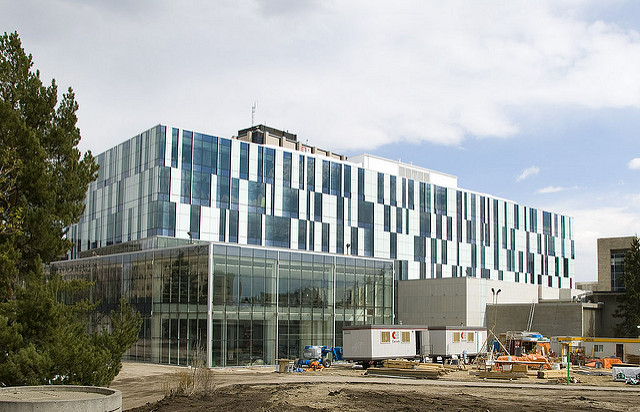 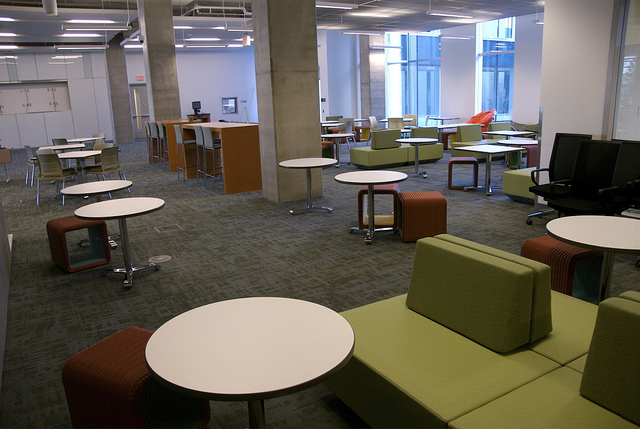 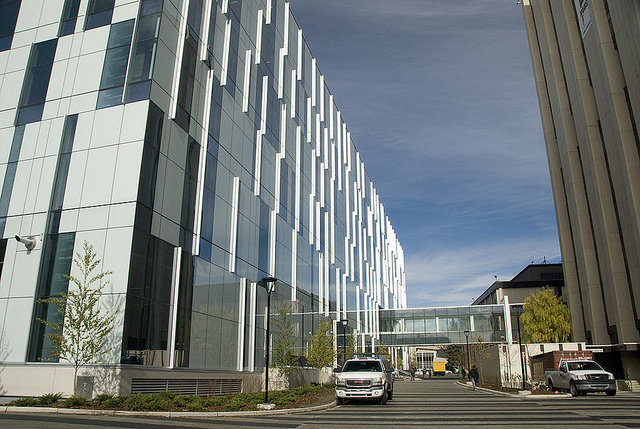 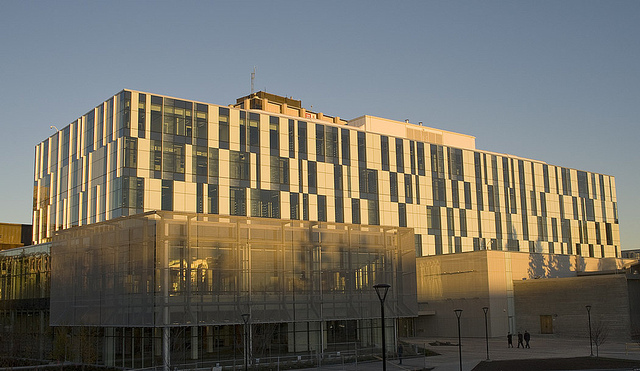 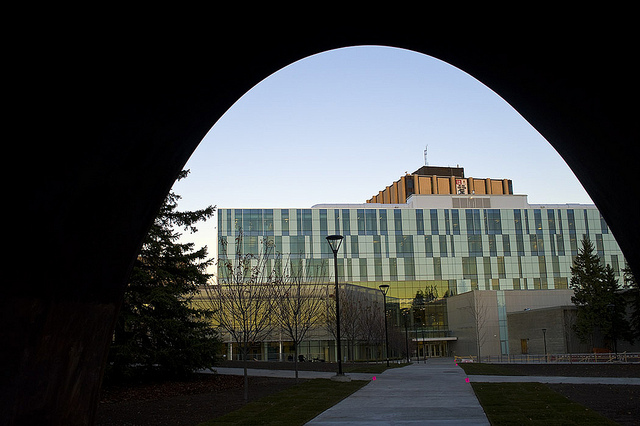 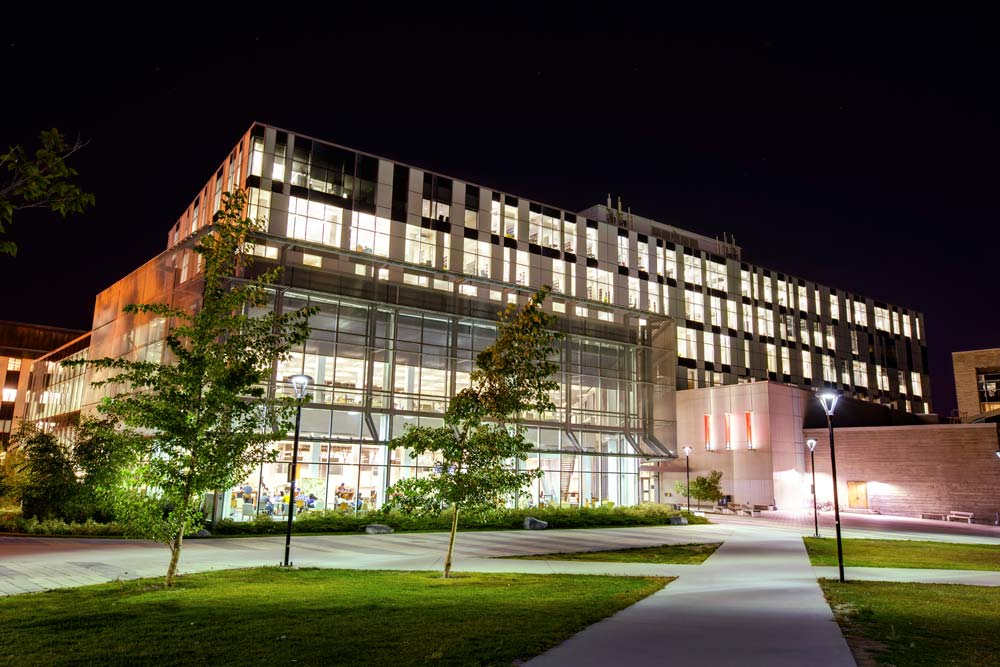 “Imagine a place where all information, whether digital databases or full text, art slides or digital images, museum collections or archives, could be accessed simultaneouslyImagine a place where you could access the collection around you, secure digital files and get the technical and reference help you needed all in one place.