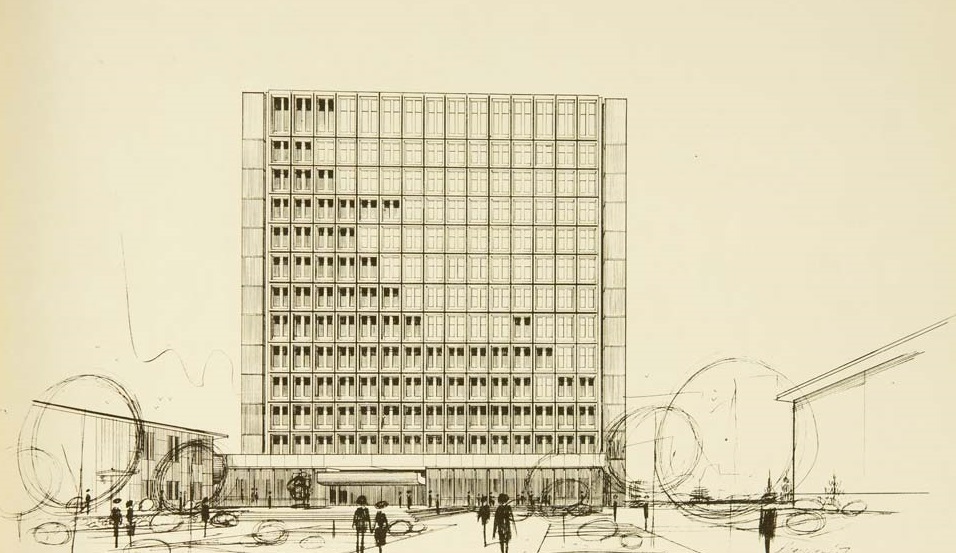 Design: M.T. Moriarity and Associates for the Alberta Department of Public Works

The first plans for the Social Science building appeared in March 1967.  The 13-storey, 239, 324 gross square feet tower had an estimated cost of $6.5 million.  The building would accommodate teaching spaces and offices for Economics, History, Social Work, Political Sciences, Sociology, and Anthropology.

The top two floors were designed for Fine Arts:  “A panoramic view of the mighty Rockies with the foothill foreground will be seen from the upper stories of this building. That is one reason for placing the fine arts studios on the 12th and 13th floors. In the evening the sparkle of Calgary can be viewed from this edifice particularly from the tall windows on the top floor.”  The designs of the 13th floor had “an extra high ceiling…heavy floors to support weighty equipment like kilns…nine foot doors…spray booths, special ventilation and extra plumbing…provided for [temporary housing of the Department of] Art.” However, in November 1967, “on the eve of going to tender,” Art advised senior administration of their wish to opt out of the project.  “This is utterly ridiculous,” wrote H.R. Hayes, Director of Physical Planning.  While the university anticipated a new building for Art within a few years, the Arts Parkade did not open until two decades later at which point Art occupied space in five different buildings.

Construction on Social Sciences began in February 1968, with a completion date of summer 1969. However, in the fall of 1969, classes scheduled for two floors of the new building relocated to the Mac Hall ballroom instead. There had been an oversight in electrical wiring, in addition to poor weather and a two-month long carpenter’s strike that all contributed to the delay in completing the project.

In 1973, a Plus-15 connected Social Sciences to the Administration Building at a cost of $125,000.  The lobby of this link underwent renovations in 2006 under the “Take Your Place” initiative; desk units that looked like white ribbons provided additional study space in a very popular area.  In 2016, the hallway between Social Science and Science Theatres closed for a few months as an engineering inspection discovered that some of the pre-cast concrete cladding was cracking and in need of repair.

The elevators in Social Sciences are a well-known cause of annoyance.  In 1992, the Department of English agreed to relocate to the top floors from Craigie Hall only on assurance of an upgrade to the elevators.  Early designs indicated that a restaurant would eventually replace Art on the top floor, but partly due to the logistics of elevator access, that plan never came to fruition.

In the 1970s, students wrote a poem about “Leon the Frog” on the risers of the tower stairs that stretched to the top floor.  In 2017, during a graffiti cleanup project, the poem inadvertently disappeared.  Following a general outcry, a group of volunteers repainted it. The university installed a sign about its history in order to prevent future misunderstandings about the legitimacy of the poem.

There is a campus legend that someone once climbed the outside of the tower by wedging squash balls into the textured cladding. This is substantiated only by what appears to be a squash ball stuck in a crack well above ground-level. However, in April 1985, two people did climb the building using rock climbing equipment, and a photograph of this is in the archives.

The porcelain mural hanging in the entrance to the Social Science elevator lobby is by artist Edward Drahanchuk who designed it for the Hudson’s Bay Company’s Oil and Gas Company building. When HBC moved offices, they donated the mural to the university. 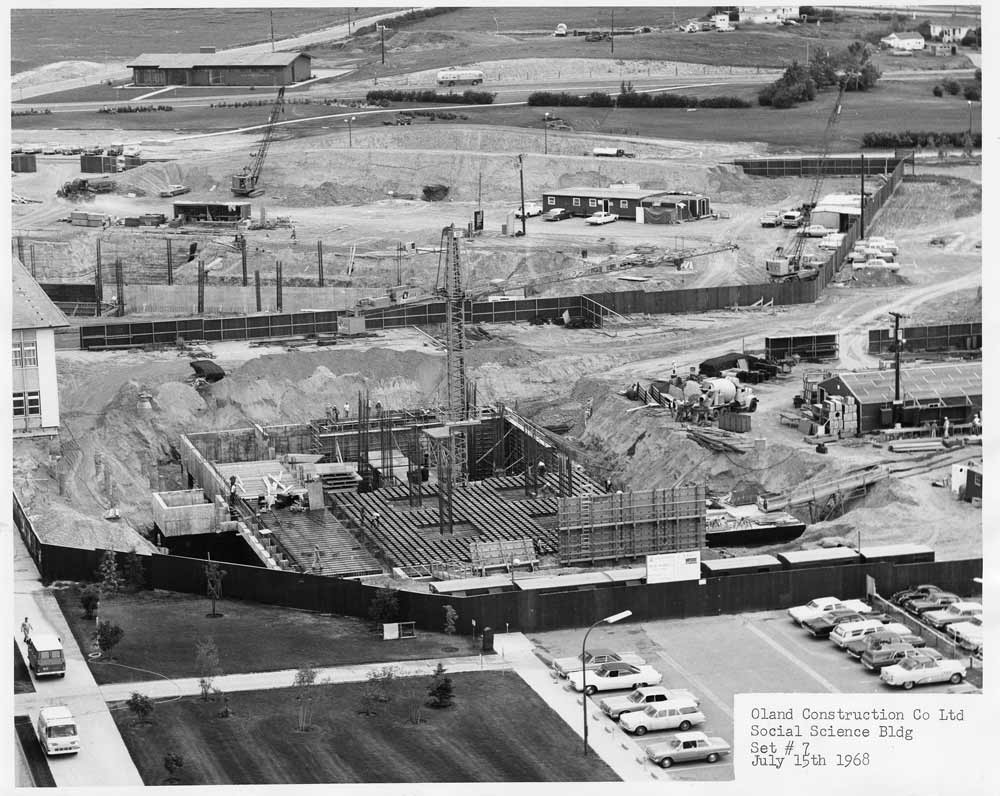 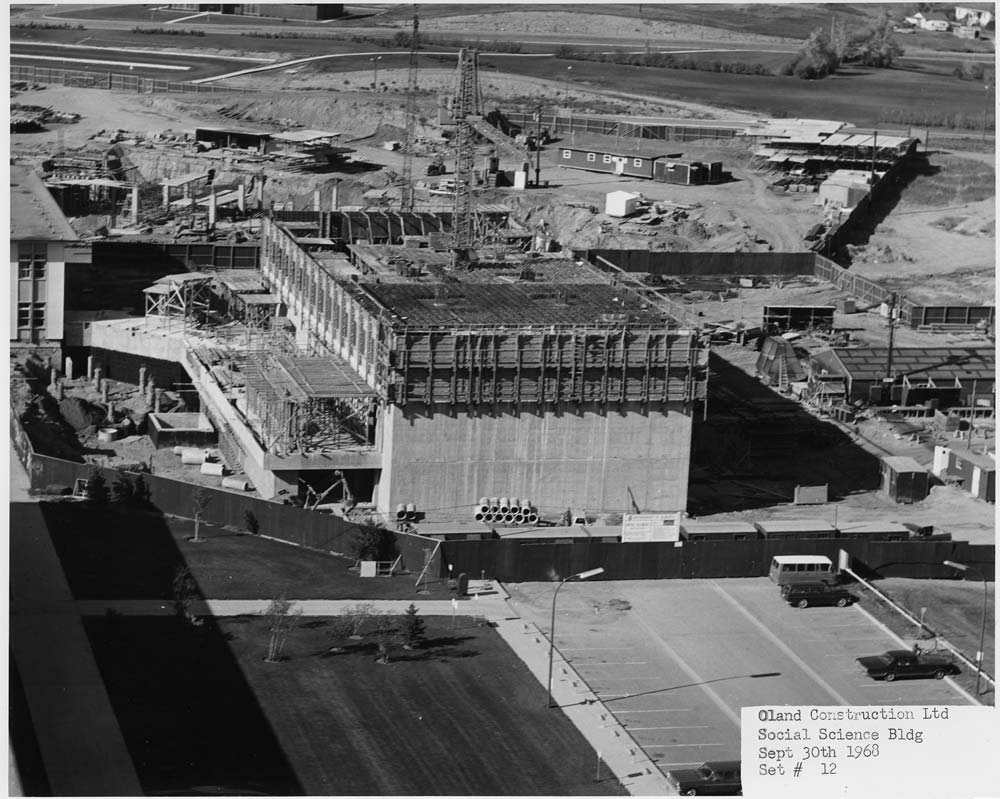 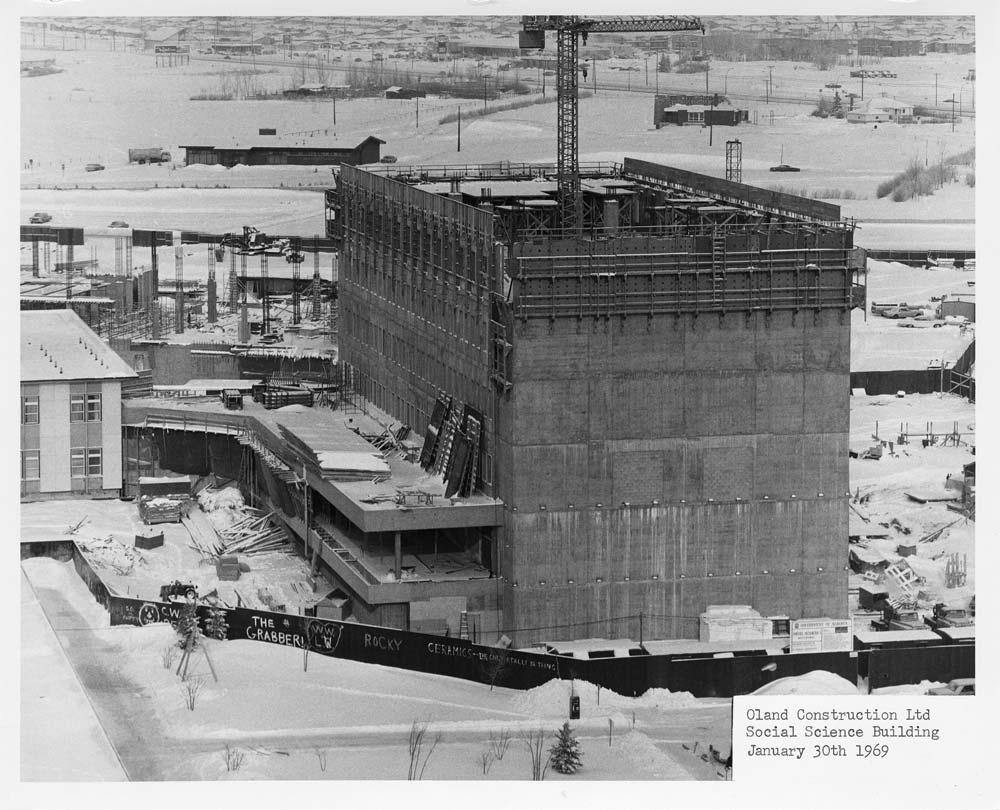 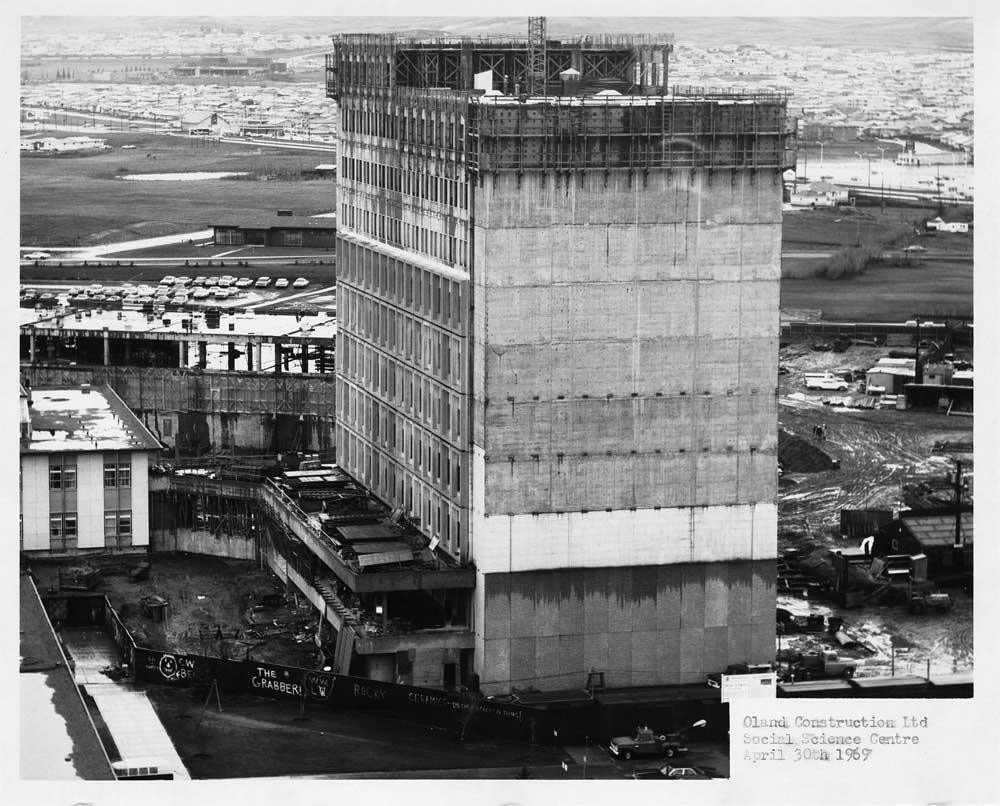 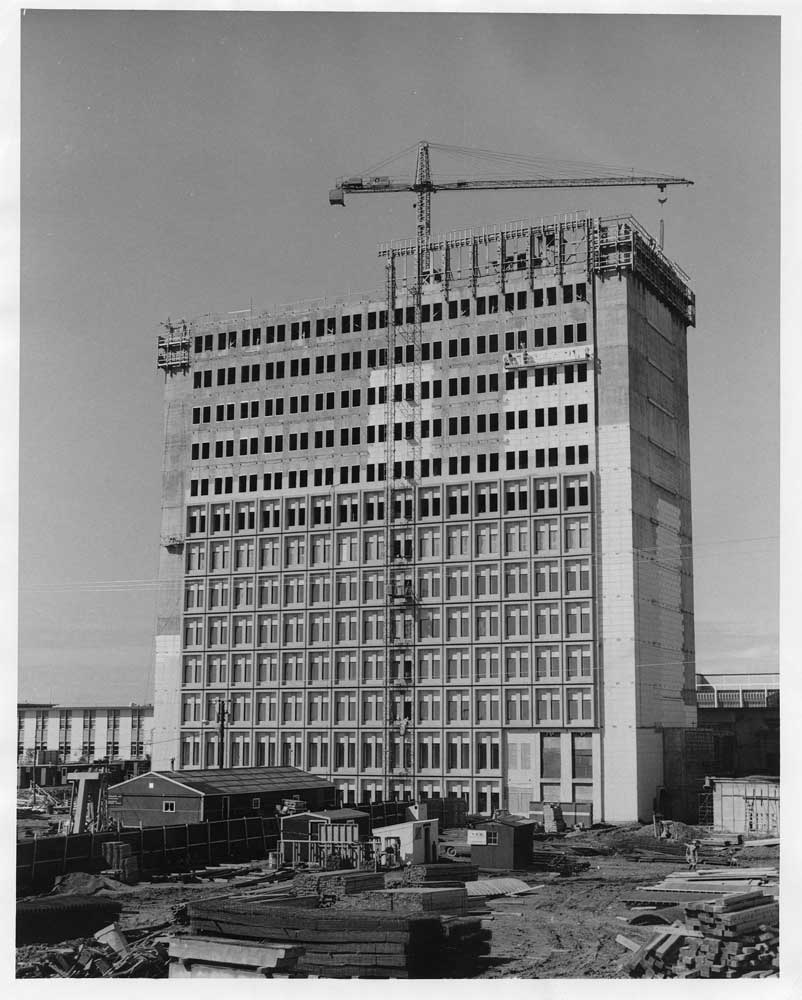 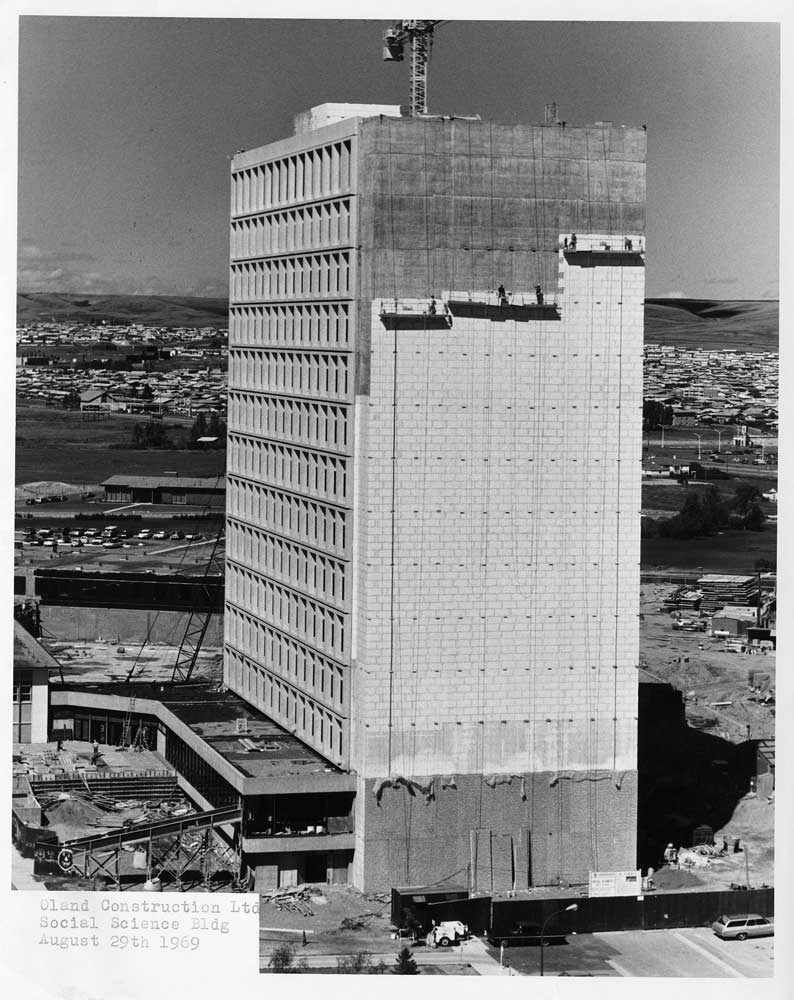 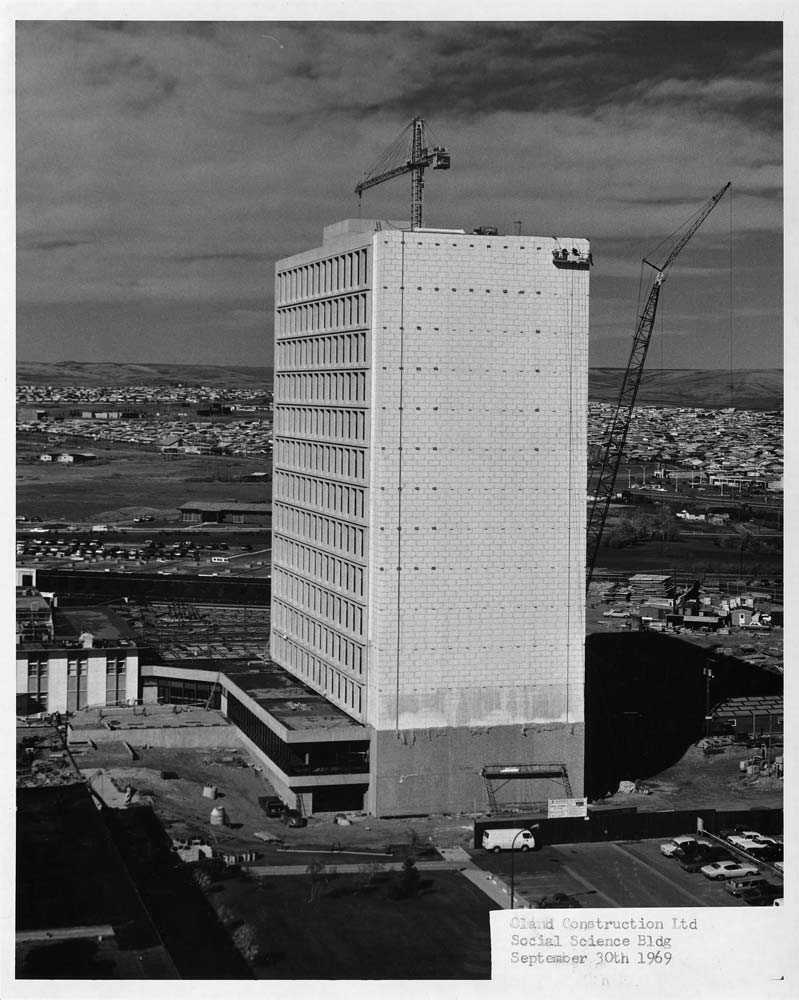 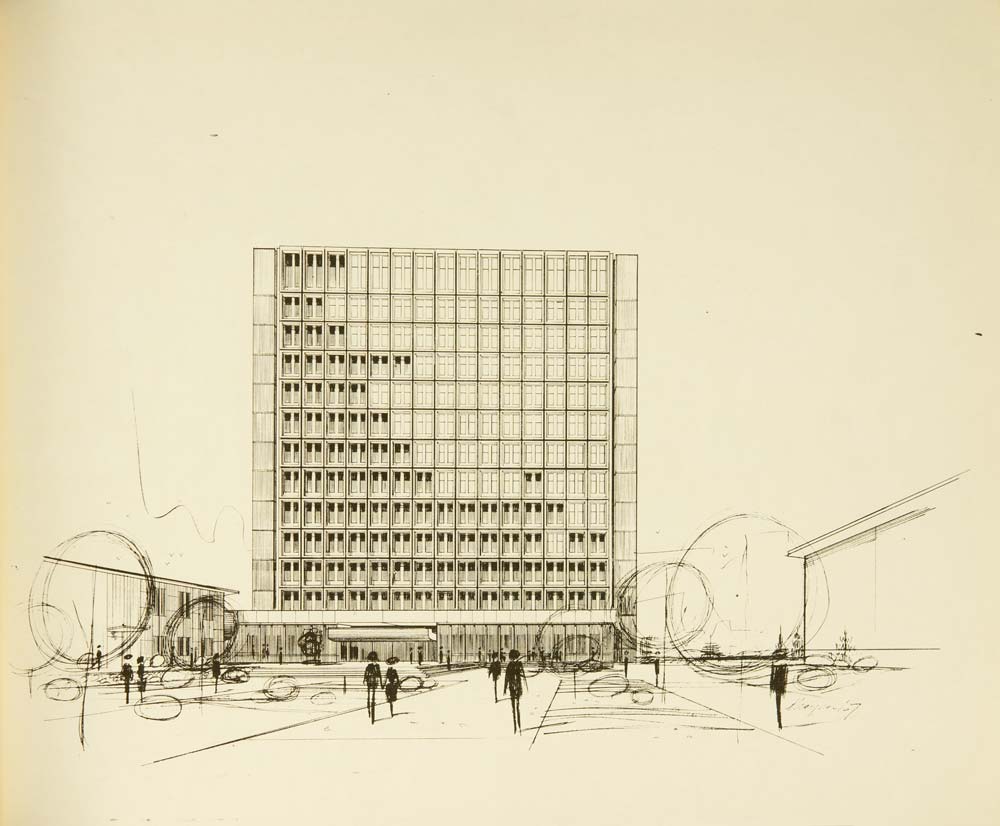 The elevators in Social Sciences are a well-known cause of annoyance. In 1992, the Department of English agreed to relocate to the top floors from Craigie Hall only on assurance of an upgrade to the elevators.