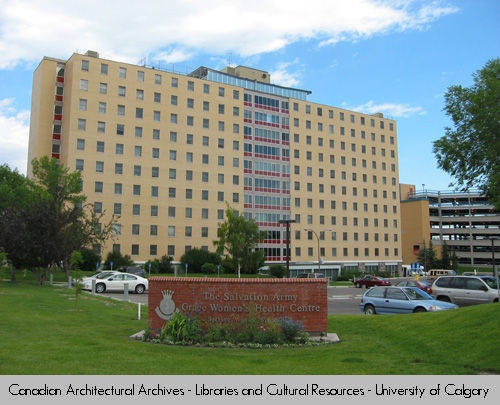 In the early 1960s, the Faculty of Nursing entered into an affiliation agreement with the Foothills School of Nursing to provide hospital-based nursing education in Calgary.  In 1963, the Department of Public Works reported that construction of the nursing school on the Foothills Campus was well underway. A two-storey link connected an 11-storey residence tower and a 3-storey classroom block.  The residence could accommodate 329 student nurses, plus a handful of staff.  Before the school operated at full capacity, and before the university built residence buildings on campus, the building also functioned as a female students’ residence.

The Foothills School of Nursing closed on July 1, 1995 in response to the provincial government’s plans to close diploma schools of nursing and to reduce student enrolment and grants to nursing education.  The buildings are now the Calgary Women’s Health Centre.

A story from Volume 6 of The Gauntlet in 1965 provides a commentary on gender-related design and reporting:

“On September 7, the seventy- six girls who will constitute the first graduating class of Calgary’s newest school of nursing moved into the ten-storey nurses’ residence…it is evident that comfort was a prominent feature in its design.  In each of the three hundred ten single rooms is a bed, (which, when made, resembles a chesterfield) a sink, a large closet containing shoe racks and drawers, and a small vanity…The facilities of the sewing room, music rooms, two television rooms and pyjama lounge are available to all students, but are especially welcomed by the forty-nine girls who are from out of town, and not able to go home every weekend.  For those who wish to study, the library and reading rooms offer necessary solitude. There is a regulation-size tennis court to the west of the building, and, for the benefit of less energetic people, a ping-pong room inside. A roof-top sundeck was built in the hopes of encouraging: some of the famous “Alberta sunshine”, but in the event of its failure to appear, many will retreat to the professionally equipped beauty salon, and foil the snow with a new hair-do. The one and only phone on each floor is shared by twenty- five girls, although pay phones in the basement are used for private or lengthy calls. The nurses may entertain in the spacious main floor lounge, or in one of the “mush” rooms (which at present are rather useless because of the large uncurtained windows on the doors.) A non-denominational chapel decorated in “foothills blue”, the school’s official color, affords a place of inspiration after a long and busy day.”

There is a regulation-size tennis court to the west of the building, and, for the benefit of less energetic people, a ping-pong room inside.