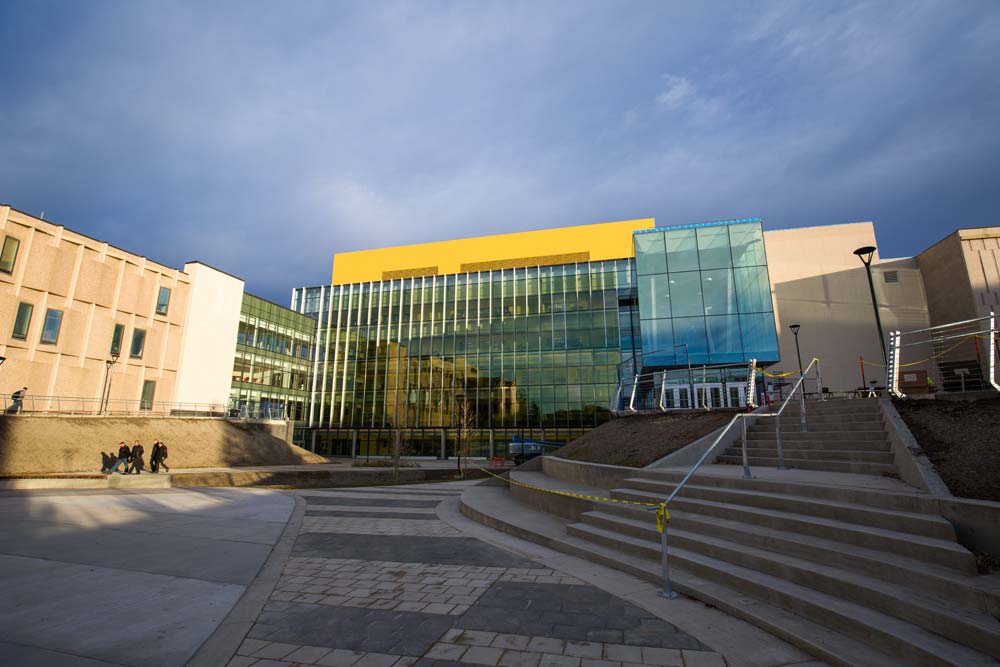 The Board of Governors approved the site for the new Engineering Building in June 1962. The first Dean of Engineering, G.W. Govier, had definite ideas about what the engineering complex should look like, and much of what exists today is due to his vision.  The entire five-wing complex was slated for completion by 1970.

Construction on the first wing, Civil Engineering (E Block) started a year late in November 1963.  The shell of the building caught fire, but the official opening and occupancy took place on time in November 1964.  The Block measured 55,800 square feet, and cost $902,318.

Stage II of the project involved construction for Chemical Engineering (D Block), and space for the Dean’s Office, a library and additional classrooms and labs in C Block.  Construction started in the summer of 1965, with a completion date of September 1966 of an additional 57,130 square feet.  In October 1966, the contractor who had installed the stucco on the outside of the building had to remove it all and install new stucco, having used the wrong colour the first time.

Stage III of the complex began in August 1966, with Mechanical Engineering (B Block).  Construction cost $2.6 million with completion in 1967; Electrical Engineering (A Block) followed at $2.3 million, 86,000 square feet, and an occupancy of 1968.

The 1967 long-term plan for Engineering including expansions to the Chemical and Civil Engineering wings, and at least a dozen more blocks to the west of the current complex.   However, no further construction took place following the completion of A Block for well over a decade.  In the late 1970s, the provincial government did allocate $5.2 million of the estimated $7 million cost to build the Civil Engineering expansion (F  Block).   The future occupants wanted more windows in the building, as the existing offices in the complex did not have enough natural light. The architect felt that more windows would not be aesthetically pleasing, and the campus planners were not happy with the wasted energy that would come from having more windows.  It took some time but November 1982 saw the official opening for F Block, after “15 years of planning and waiting.”

In the spring of 1984, Blocks C and D were undergoing asbestos abatement when a breach occurred in the barrier sealing off the work areas from the rest of the building, with a resulting evacuation.  The building shut down until cleanup occurred, but the incident caused quite a stir in the university community, especially as other buildings were also undergoing abatement procedures.

In the mid-1980s, the university held a competition for a sculpture to replace the courtyard fountain in the centre of the complex.  Stephen Cruise won the competition with his sculpture “Firetell,” more commonly known as the fire sticks because of their shape and colour.   The sculpture was decommissioned in 2014 when the complex expanded into the courtyard space.

By the early 1990s, the pressure for space resulted in Mechanical Engineering moving across the road to the Petro-Canada building.

Further expansion of the Engineering complex did not take place for close to 20 years.  In 2009, the School of Engineering produced a new master plan for the complex, noting that the current buildings were no longer within modern fire code standards, that there were not enough women’s washrooms, and that the connections between the wings were “maze-like.” The School proposed an expansion in the centre of the complex to allow for easier connection between the blocks. The provincial government provided a grant of $14.4 million, and the federal government gave $9 million.  Donations, including $7 million from Canadian Natural Resources Limited, amounted to an additional $15.8 millions.

G Block officially opened in November 2016, adding 18,300 gross square meters to the complex, and extensive renovation of another 11,100 gross square meters.  The central atrium features another of the “social stairs” on campus, and natural light resulting from grading the area to the basement level.  The interior walls retain the original cladding, a unique basket weave pattern of precast flamingo quartz panels.  However, the interesting feature of the “door to nowhere”, an exterior door that opened to thin air three floors above the ground, probably meant to eventually connect a walkway to the Science complex – was removed. 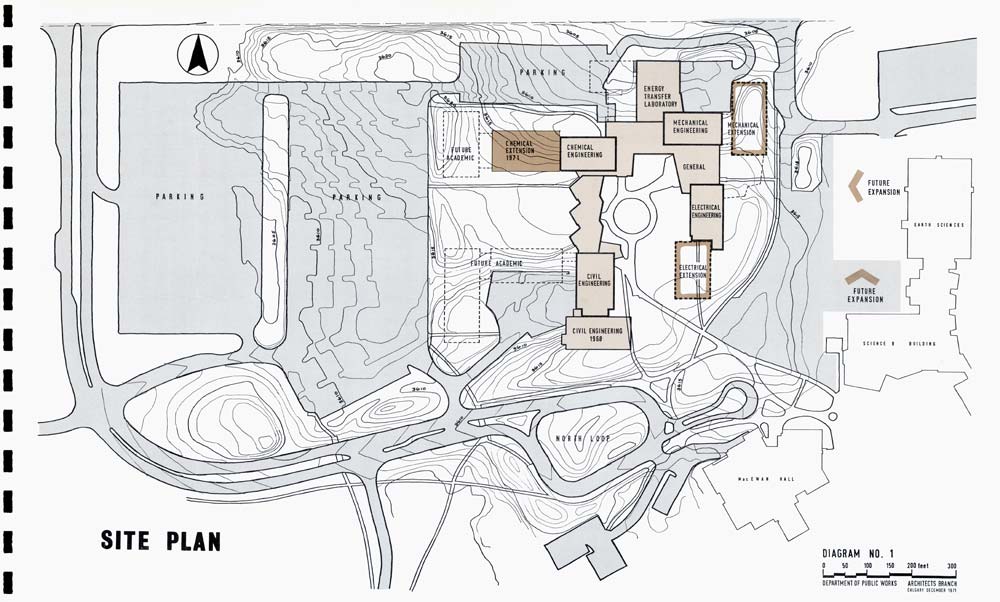 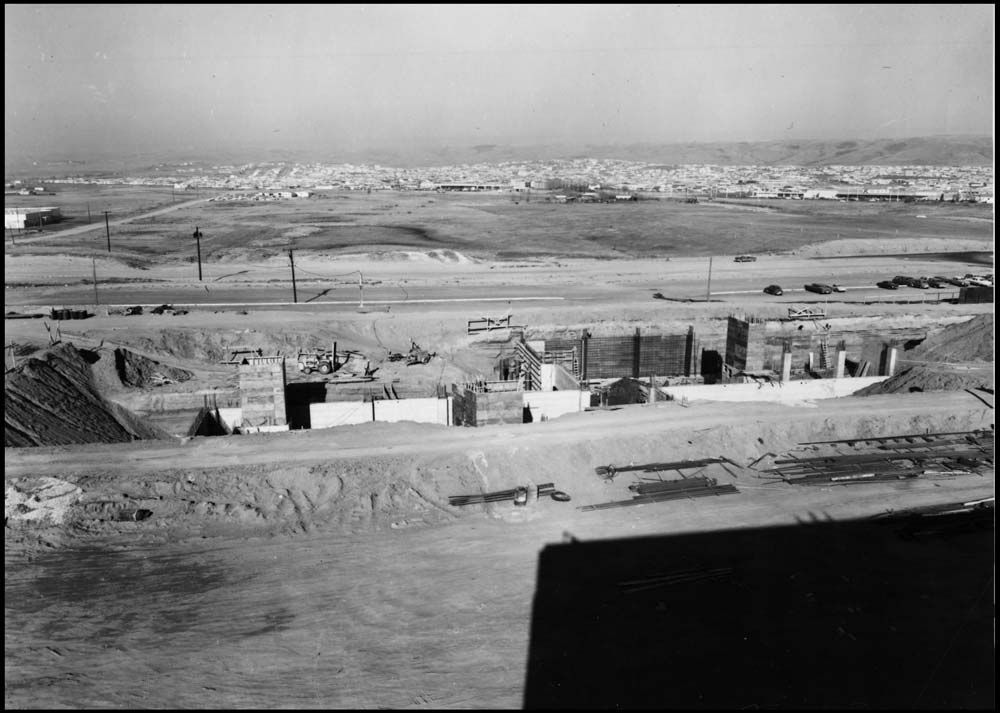 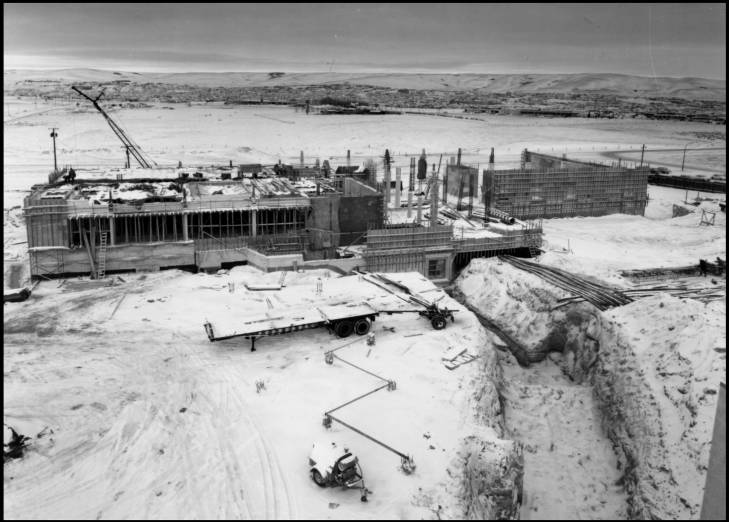 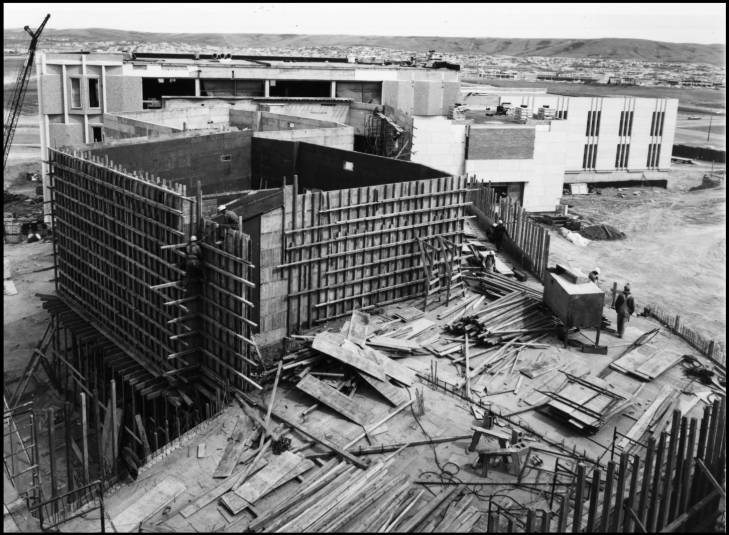 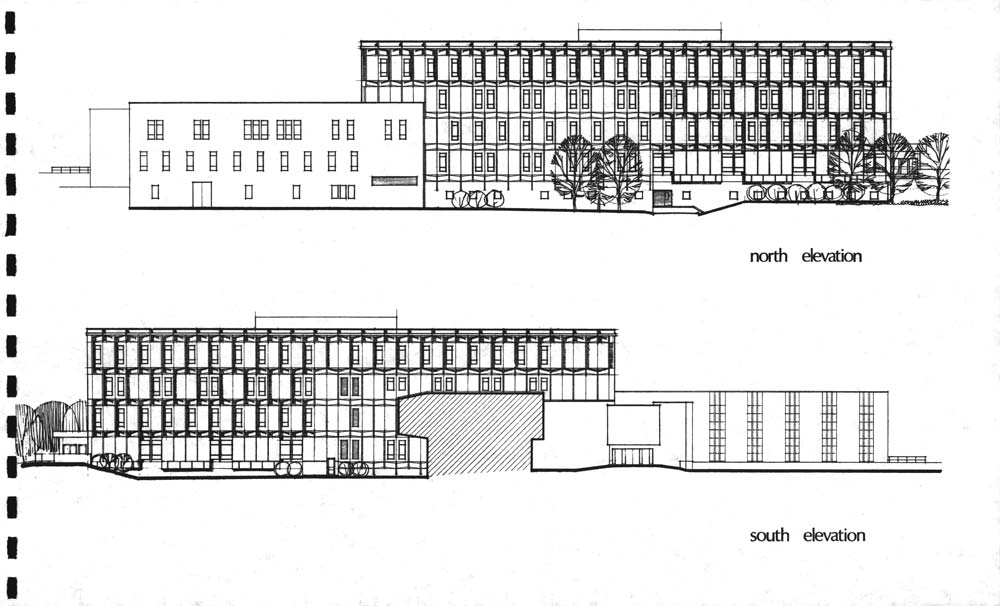 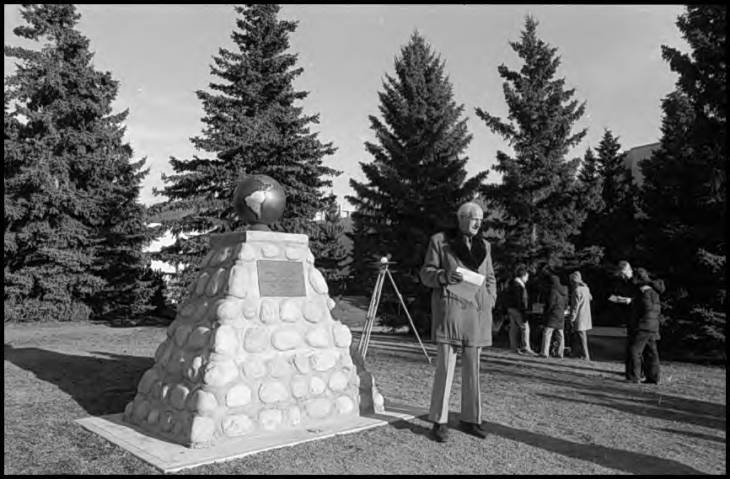 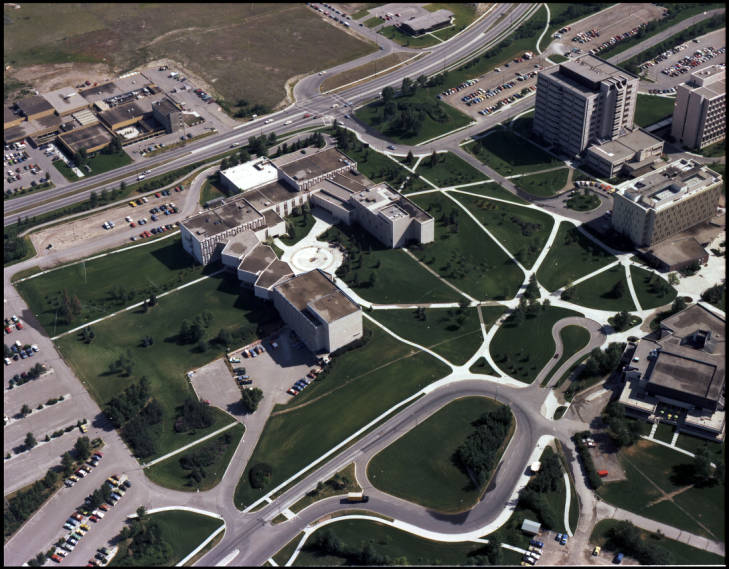 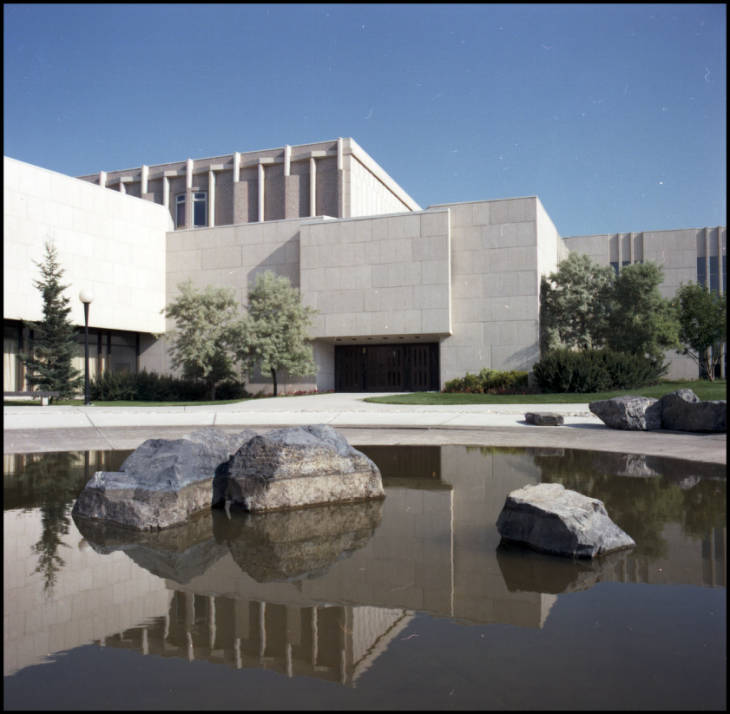 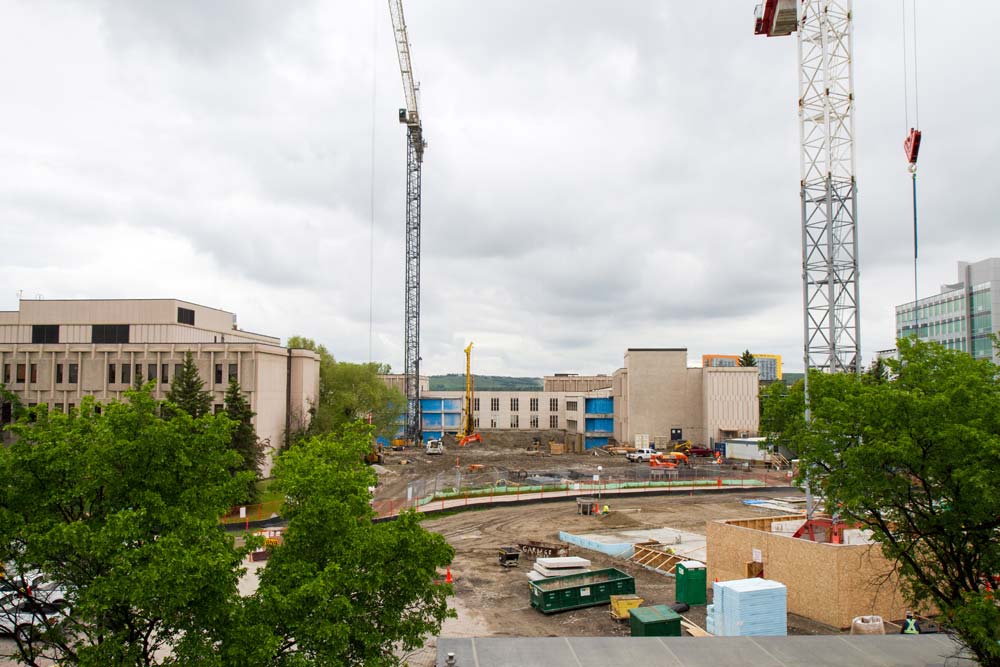 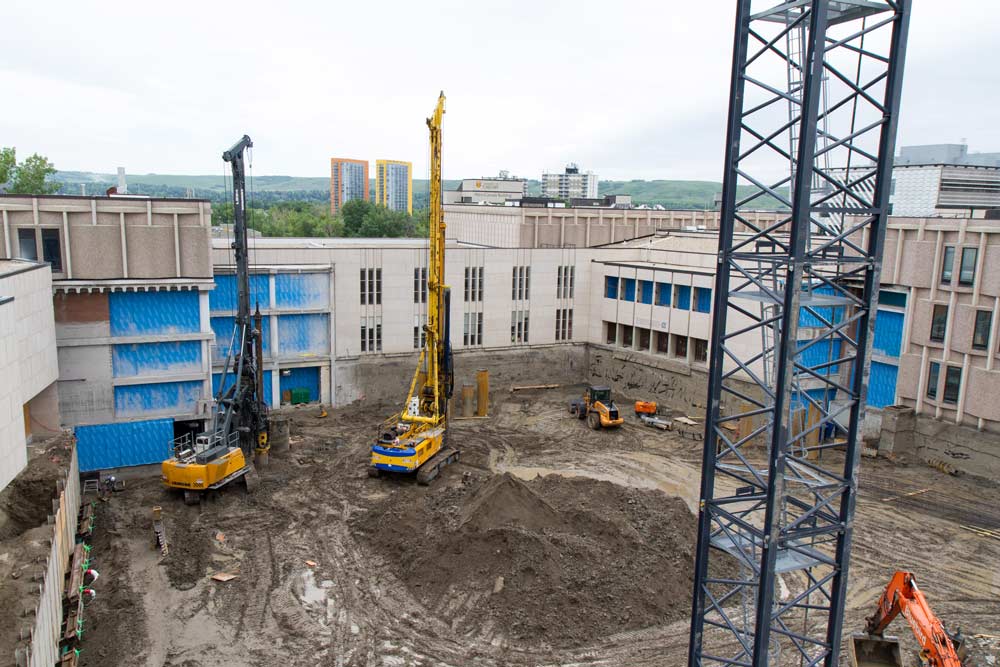 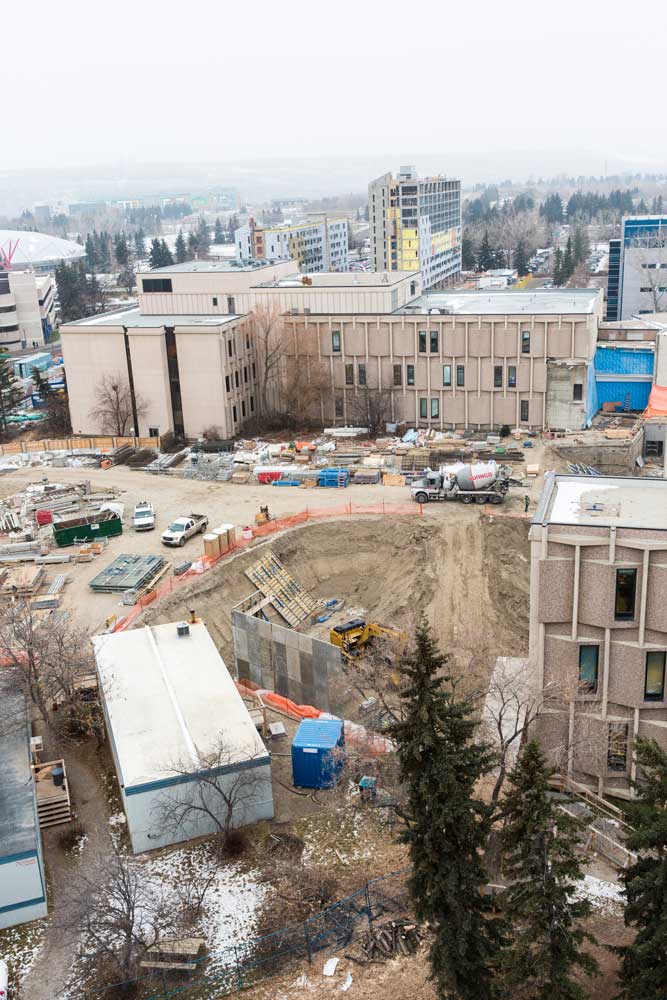 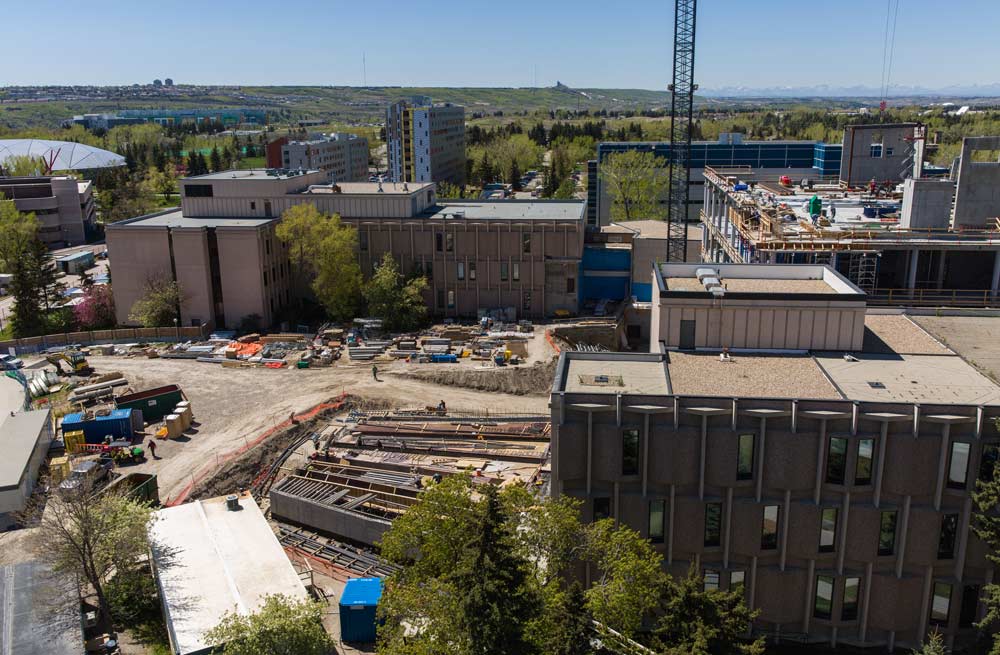 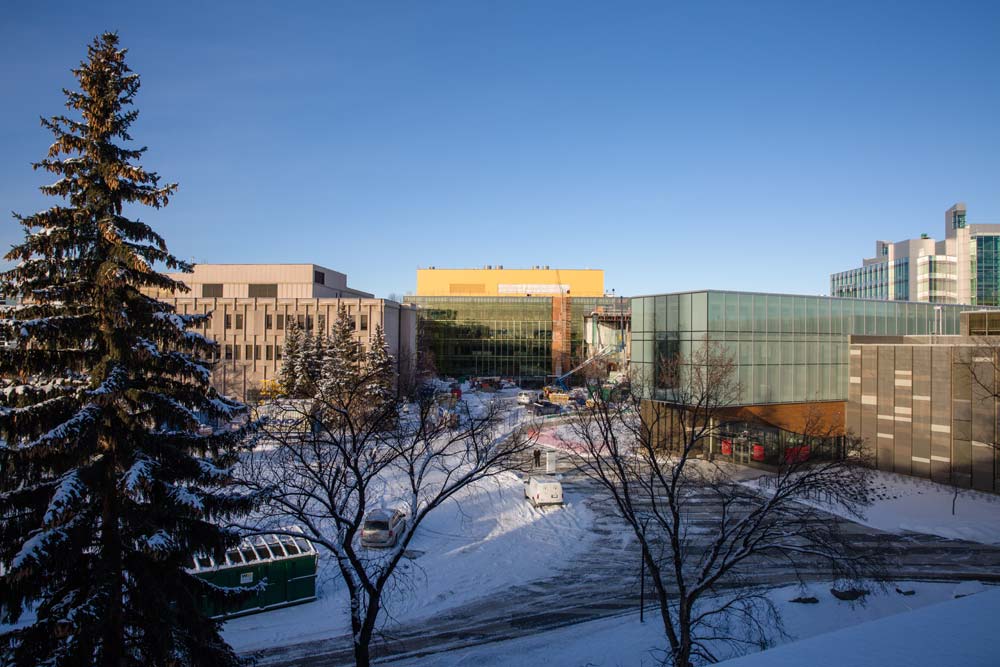 The future occupants wanted more windows in the building, as the existing offices in the complex did not have enough natural light. The architect felt that more windows would not be aesthetically pleasing, and the campus planners were not happy with the wasted energy that would come from having more windows.