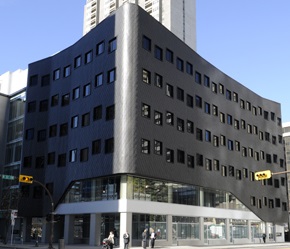 In the fall of 1979, several faculties proposed an “interdisciplinary University downtown presence.”  The then Faculty of Social Welfare had approached the faculties of Environmental Design, Law, Nursing, Education, Continuing Education, and Medicine to consider a “physical space in the downtown, or inner city [area]…that would allow a person to walk in with a problem, and be helped to define and solve it without being referred into the bureaucratic shuffle.”  The downtown space would focus on elements of education and service within the parameters of each faculty.  A 1981 consultant’s report recommended “a dedicated facility of some 150 square metres in the neighbourhood of 7th Ave SW and 4th Street SW be acquired immediately.”

While some individual faculty projects went forward, including a partnership with the Salvation Army’s Centre of Hope, a consolidated downtown presence took longer to achieve.  In 2004, the University conducted community research into a proposed “Urban Campus Initiative” with a presence in the East Village, (where the National Music Centre is now situated); the project received an enthusiastic response, with the proviso of a shift in location further west.  Concerns for an East Village location centered on “personal safety, attractiveness, and accessibility (physical and financial) for potential community users.”

The Urban Campus project underwent considerable change between 2004 and 2009 with an ultimate reimagining as the Downtown Campus.  The Board of Governors gave final approval to the project in February 2009 as a $100-million, 20-year-lease to an existing 6-storey medical building at 8th Ave and 9th Street SW.  The extensive renovations included asbestos abatement, structural upgrades, raising the roof to build an atrium, and upgrading the mechanical, heating and cooling systems.

The Downtown Campus opened in September 2010 with LEED Silver certification.  The building also received a Vitality Award from the Downtown Association, and the 2011 Mayor’s Urban Design Award. 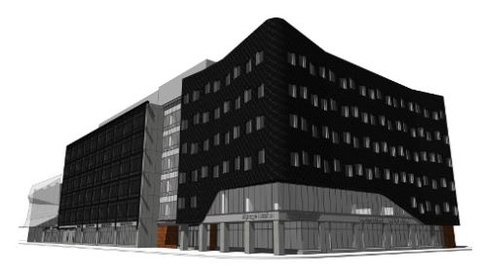 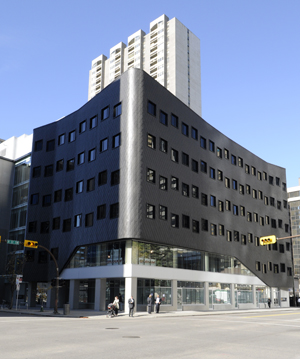 The Downtown Campus opened in September 2010 with LEED Silver certification. The building also received a Vitality Award from the Downtown Association, and the 2011 Mayor’s Urban Design Award.