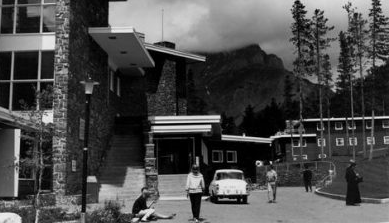 The Banff School was a success from the beginning.  The administration hoped for 40 students to register for the 1933 drama school; they had 130.  In 1935 the School’s name changed to Banff School of Fine Arts when painting, and later everything from music and dance to weaving and French were offered.  Notably in the 1940s, a “lady sheriff from New Mexico” took a painting course. Unfortunately, no further archival details are available.

The School’s popularity soon outgrew the existing buildings.  In 1945, the first chalets at the Tunnel Mountain location were built; a year later, buildings previously used at a prisoner of war camp were repurposed into student lodging at a cost of $350 for the buildings, and $15,000 to make them inhabitable. Accommodations for 140 more students were constructed in 1948/49, and dining facilities for 500.  An administration building was constructed in 1953 for $400,000, and wings were added in 1958 (including a dining room), 1959/60, and 1961/62. Residences were built in 1954, 1955, and Chalet IV was built in the early 60s for $350,000. The Eric Harvie Theatre, a practice theatre, and a teaching wing were built in 1968/69 for $525,000. Additions were also planned to expand Rundle Hall.  Most of the construction was funded through the school’s profits, but there were generous donations and many grants as well.

By the spring of 1971 it became obvious that most of the earliest buildings needed renovations; Chalet I, built in 1947, was uninhabitable. Sometimes the School had trouble finding art experts willing to teach classes because the workspaces and accommodations were inadequate. Also at this time, the relationship between the Banff School Council and the university was fraying.  The university’s capital budget supported the building and renovation requirements of the School; all budgets and funding requests had to go first to the Capital Development Committee, and from there for consideration to the provincial government’s Universities Commission.  The Banff School chafed under this bureaucratic requirement and circumvented the process by approaching the Universities Commission on their own; the Capital Development Committee eventually recommended that the university’s Board of Governors give “serious consideration…to the severance of the relationship.”

The Banff School achieved autonomy from the University of Calgary in 1978 as a non-degree granting institution.