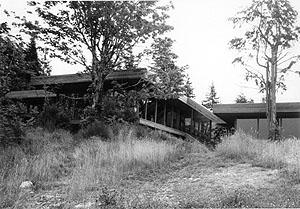 Occupancy over time: Marine and coastal scientists from the member universities and from other Canadian and international institutes, including undergraduate and graduate students, post-doctoral fellows, technicians, school and other public groups pursuing programs in marine biology and general science.

The Bamfield Marine Sciences Centre is located on the west coast of Vancouver Island.  The original station was built in 1902 as the final link in the British Empire’s telegraph system, the first globe-spanning communication network.  Francis Rattenbury designed the original building (Rattenbury is best known for designing the Empress Hotel and the provincial legislature building in Victoria.)  The station also resembles a Canadian Pacific hotel given that CP Rail was responsible for operating the land-based telegraph lines across Canada.  The station fell into disuse in 1959 when a semi-automatic cable station opened in Port Alberni.

Dr. Hartland-Rowe, a biology professor, described the station in 1979 as “absolutely first class. The quality of environment is so high they couldn’t do better for marine ecology.”  However, he also noted that the pressure of building accommodations had meant that the equipment budget was somewhat lacking.  Hosting researchers and students at the site necessitated a spate of building in the 1970s and 80s.  A bunkhouse and trailers were added in 1976, with a new dorm built in 1981.

Bamfield Station is “absolutely first class. The quality of environment is so high they couldn’t do better for marine ecology.”